The theme for this season’s productions is that of identity, and so I thought it would be fun to explore that idea based on my experiences from the past few days here in Stratford.

Welcome to Stratford, Ontario’s seedy underbelly. It is hidden from view from the window of your hotel room. It is from where–according to rumor–the empty Pall Mall brand cigarette packs have floated to litter the quaint clean streets of downtown like confetti. Confetti from a party you didn’t even know was happening and were much less invited to. It is the grainy freckle of stray pebble inside some precious gem, difficult to distinguish, but worth a look maybe. It is directly “across the train tracks,” which means train passengers passing along this town’s division line will perceive Stratford to be entirely different depending on which side of the car they may be planted, remarks on the next stop issuing bemused incredulous squints from opposite sides. It is here that jort-clad men stroll the grounds outside their jaundiced and worn ranch-style houses baring pale sunken chests to the outside light. The sweat on their chests inverts that light, flipping the town on its cute head. I have come to witness this inversion.

So I take scissors to my Levis until they are comfortably above my knees. I haven’t shaved since before I left Ohio, and dull wool resides on my cheeks. I then cap myself with an officially licensed Toronto Maple Leafs hat found in a thrift store here. The bicycle I choose at the rental place has a rusted chain and a seat that sings when the springs wink upon sitting. There is some dry left over sweat crust on the handle bar’s cracked rubber grip. I cannot tell what brand the bicycle is. 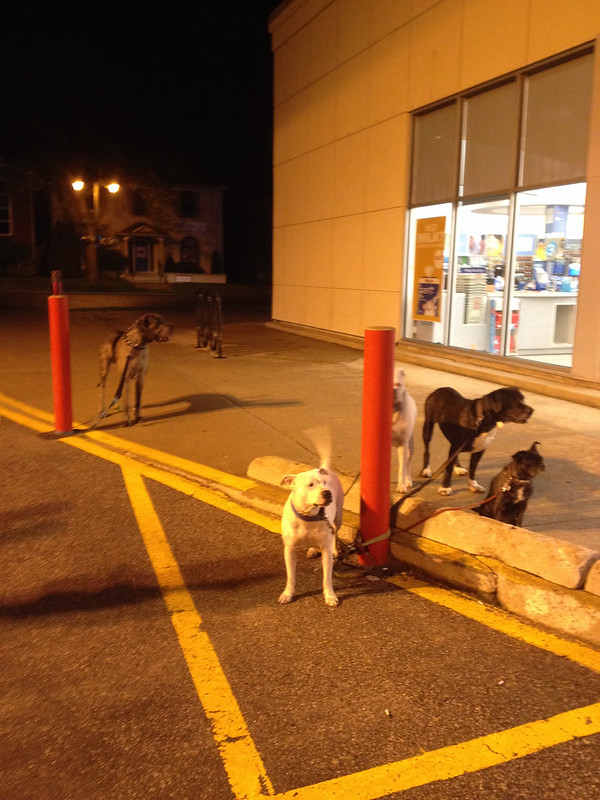 I begin my ride through Stratford’s streets like a rat in a maze; where is my cheese? Removing my arms from the sleeves of my t-shirt and sitting it on my shoulders, the breeze I feel afterward is nice. Eventually, the frequency of empty Pall Mall packs on the pavement begins to escalate as I get nearer to the tracks. My appearance seems to bother some of my fellow tourists here, if the looks they give me are any indication. Maybe I am a rat to them. I must be blending in, then.

I arrive at the train tracks and pause for a bit. This is where the town is said to be split. The tracks hum and vibrate in their place in anticipation of something. Or maybe they could just always do that. A street sign points inward with “slut” written in that graffiti swooping and swirling style and so I guess to head that way.

12th Street is not on my Explore Stratford Map map, but I am here. It holds mostly undeveloped plots of sparse and fuzzy looking grass and a couple of small houses. The red house with some remnants of a past garden is the one I choose to pause in front of and photograph for later use on the class blog. Inside my camera’s peephole, I see the screen door spring open with a gravelly sound like antique shears, and a woman appears on the front porch flushed and sticky with sweat like a newborn. She asks me what the hell I’m doing, tourist, and laughs to herself at my stutter-response as I take the camera away from my face.

She is stunning and has a way of looking into my eyes like she has already recognized me, and never breaking that form of her face. The woman halts my continuing apologies–she isn’t paying attention to my words–and invites me inside. I refuse, she persists, and so I obey her. 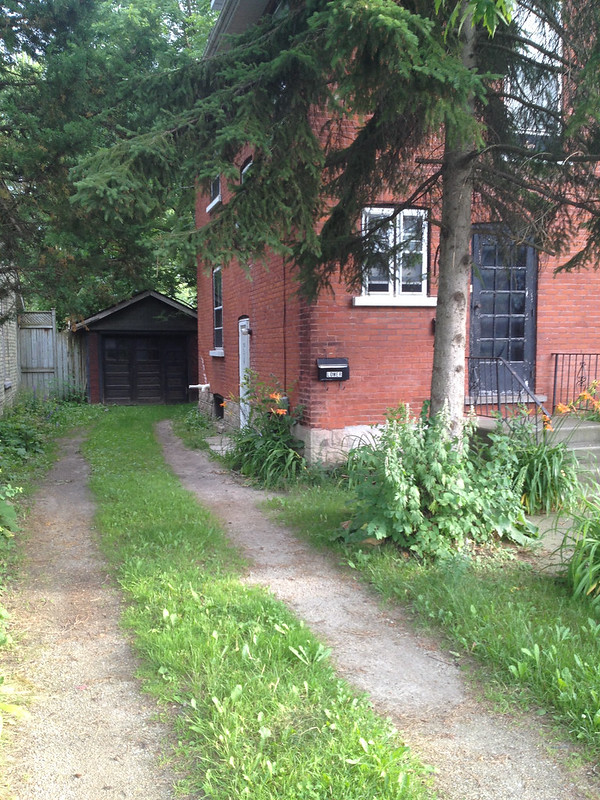 Inside, her daughter is asleep on the couch with a stuffed wolf and moose. It is quiet in here, just the grandfather clock and drone of the refrigerator. She asks me to sit and I do. In the following conversation, she only asks me questions, is only concerned with my life. And she is brilliant and sweet and we share a can of lemonade over ice while her daughter lies supine on the couch and stirs from time to time. After our ice melts, she tells me that she is a former actress with the company. I ask, then why is she still here? She just never left, she guesses.

Coming to another country is amazing in its own right, but being in another country for its national holiday is something special. I love being able to celebrate the Fourth of July with family and friends, but I forget the passion and meaning behind Independence Day until observing a whole country react to their own special day.

Firstly, everyone wears red on Canada Day (much like in America with red, white, and blue) for it is tradition and a way to show pride for their county. However, it goes so much further then that. There are stands handing out free pins, balloons, and face painting to show one’s love even more. Even the buildings and cars are covered in Canadians flags so every inch of the town shows the love for the country. 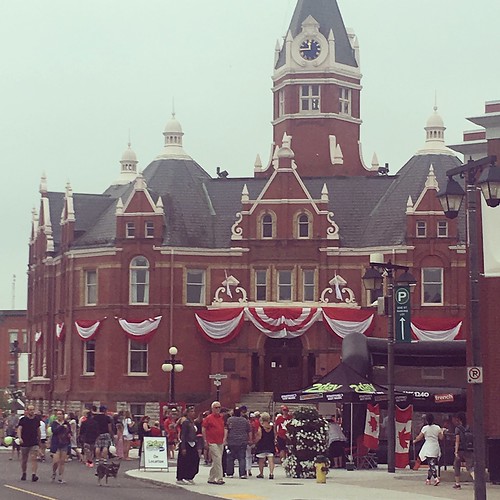 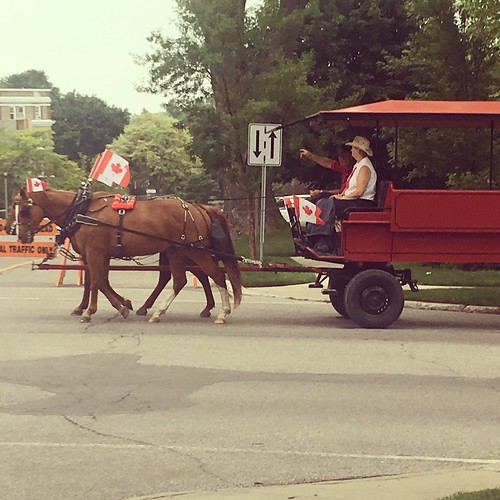 Then, there where festivities throughout the entire day. The morning started with a fair atmosphere with food vendors and booths. However, once the tribute to Canada started, the area changed. People where rapt with attention and every sang there national anthem. I could feel the pride in the air standing amidst the crowd. Then, a surprising three War World II planes flew over to surprise the audience. The excitement in the air was riveting and contagious. I felt giddy just being in the country and allowed to watch something so obviously special to these people. 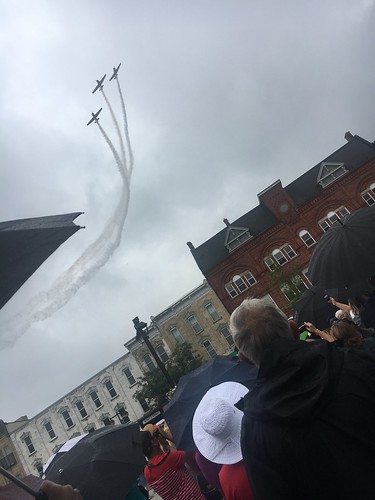 The day finished with a parade honoring the special programs and people in the town and an impressive fireworks display at nightfall. The day was a whirlwind but amazing. I could not walk anywhere without the greeting or Happy Canada Day and a smile from a friendly stranger. It was an amazing experience one that I will never forget and that I will be reminded of every July 1st from here on. 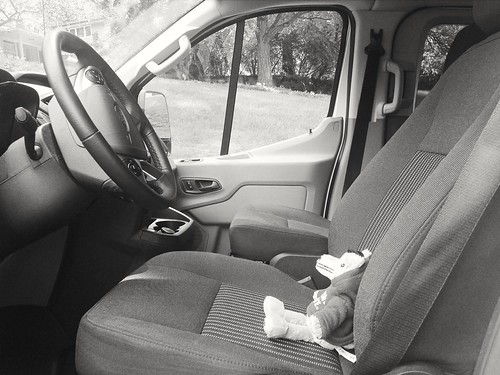 I have been driving the road from Wright State University to the center of Stratford, Ontario for a few years now. While I-75 promises smooth, highway speeds it also preordains the never-ending construction that plagues all major roadways. While I have every intention of stopping no more than once for the cheaper US gas before crossing the border, I inevitably stop three times for bathroom breaks and gummy bears (the apparent favorite food of college student road trips). END_OF_DOCUMENT_TOKEN_TO_BE_REPLACED