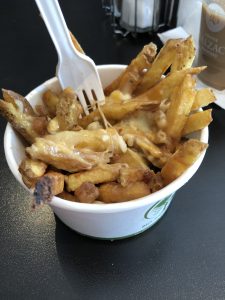 Okay so, I am a major foodie. I mean I LOVE food. A while back I had seen this thing called Poutine on Facebook, on one of the Insider videos, where they post videos all about different kinds of food. I had forgotten all about it until I went to Stratford, and on the tour of the town we were shown the restaurant “Boomers” which sold Poutine.

I instantly was so excited because although for some reason the combination of gravy, cheese and fries sounded super weird to me, I knew I was definitely going to try it before I left Canada. Plus, i knew if I didn’t like it, Boomers sold other gourmet fries so there was absolutely going to be something I was interested in.

When we got to Boomers, It was way smaller than I expected, and it was almost old fashioned. One of the first things I noticed was the fact that there was only one table and it was like a bar, so if it were busy enough, you would be sitting next to a stranger. I thought it was almost a little weird, but then I loved it because it was just another thing showing how close the people in this town were.

I ordered the Poutine with extra cheese ( because I love cheese on a new level). I was already extremely hungry, but when the fries came out I was so excited. I didn’t know what to expect but it was honestly one of the best foods I had tried in a long time, and it was such a great decision on my part. I do not think I will ever be able to go back to Canada and not order Poutine again.

Yet, while I’m stuck back in Ohio, I will definitely be spending my time looking for Poutine on any menus I can find!