The Stratford Festival was my first time watching Rocky Horror (yes, my title was about being a show newbie get your mind out of the gutter). In fact, I did not have any idea what the play was even about. Obviously I had heard about it before, but I did not have any idea what the plot or premise of the show was. Going into the stores I began to learn that the aesthetic was fishnets and red lipstick which had me wondering what the show was going to be about and whether or not it had horror in it. It came time for the show and I looked at my playbook and much to my surprise there was a transgender woman on the front of it, which had me more confused as to what the play was about. 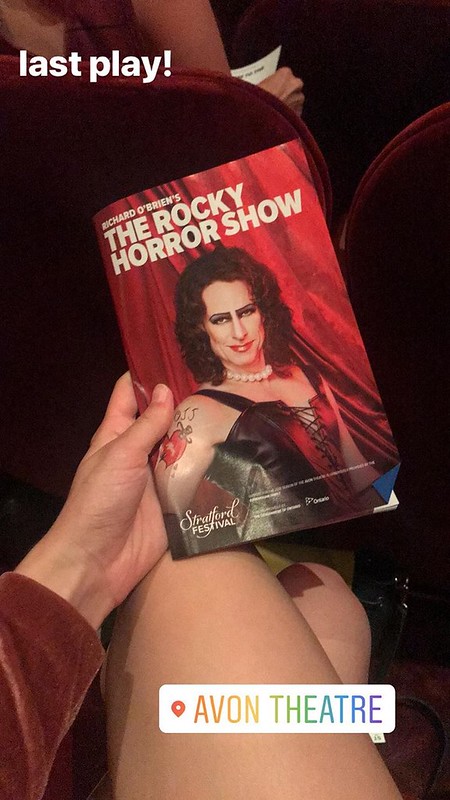 There was no way I could guess what this play was going to be about. The play started out with audience participation, which I had heard about, but actually hearing it in person was so surprising. After seeing all the other plays where everyone had to be silent it was exciting to hear everyone yelling obscenities to the actors. It was so funny to hear the same old people silently watching Shakespeare yell “slut!” and “asshole!” it definitely was a new experience. This play would probably have to be my favorite out of all I had seen so far. It was unlike anything I had watched before. It was almost refreshing to watch something that is funny, sexual and crude. It was also fun seeing all these people who looked like they would not enjoy something like this yelling out during the play. My favorite part had to be all the songs, though. The singing was amazing and I was especially shocked when Riff Raff sang his opening number. His voice was amazing and shocking to hear because of all the high notes. The show had me on the edge of my seat excited to see what would happen and I was even sad when it was over because it was a whole experience, and i was so happy to have been able to be apart of it.