On Monday, we went to the laundromat near the hotel.  I brought my copy of A Comedy of Errors expecting to have a lot of down time while my clothes were going through the cycles.  The washers and driers only took quarters so we had to use change machine.  When I put a Twoonie (duplicates from the recently searched roll), I got a Loonie and four quarters.  If I did not need the Loonie, I put it in the change machine and got four more quarters. To me, this was almost like playing a slot machine in Las Vegas.  Granted there was not the chance to hit the jackpot, but I do not loose anything.  Any quarters that I did not want went into the washer and drier.  Change machine quarters get pretty beat up, but I found several interesting (but not valuable) quarters. 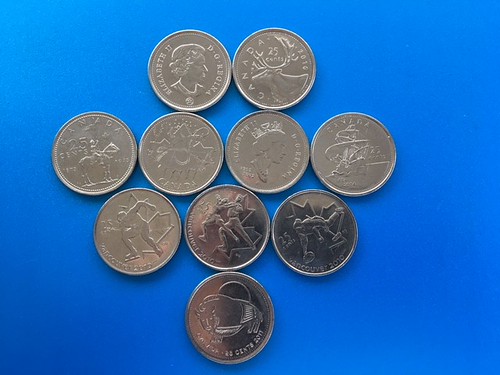 Later in the day, in change from Dairy Queen, I received a 2005 quarter from commemorating Alberta’s 100th anniversary.  I checked my coin list and I already had one, however I am going to put  it aside.

One interesting thing about having Queen Elizabeth’s image gracing the coins is seeing the changes.  She has undergone 4 portrait changes over 65 year reign.  Obviously, she has aged since coronation in 1953, but most interestingly, in the current recent image, she no longer wears a crown.  There are several theories as to why (she has been queen for so long that everyone knows she is the queen, she is weary and the crown is heavy, not wearing a crown is a less antagonistic image to Commonwealth nations, etc).  As I lined the quarters up to take the picture, it made me think about the changing faces that we have seen in Stratford Festival, from Prospero to the Bronte sisters to Coriolanus. 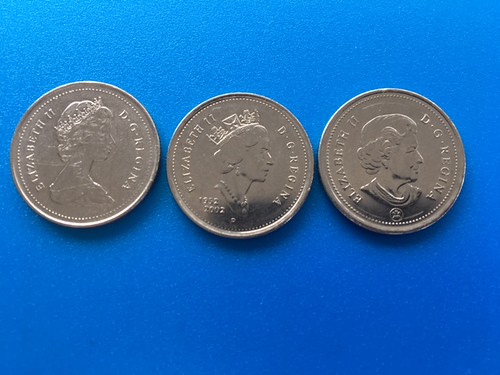 So, the next time a cashier gives you some change, you may want to look a little more closely – there are history and geography lessons in the tiny pieces of art you in your hand.