When I try to describe why coin collecting is such a great hobby, I usually mention that it is a great tool for learning history, geography and art appreciation.   It is also a great way to figure out what traditions, ideals or images a country holds dear.

Saturday afternoon, I went to one of the local banks and exchanged some American money for a roll of Twoonies ($2 coins), Loonies ($1 coins), quarters, dimes and nickels. I asked, hoping beyond hope for a roll of pennies, but Canada stopped minting cents in 2012 as the cost to produce a penny cost more than its face value.   The reply that I received  from the teller was a half-smile and a shrug.  As much as I was disappointed by not getting any pennies, the bank teller surprised me by asking if I wanted any Voyageur dollars. I have found loonies in a roll of US President and Sacajawea dollar coins, but I have never found Voyageur dollars “in the wild” so to speak, so I asked if I could get the remaining balance in Voyageurs. Yeah exchange rate!

Minted from 1935 to 1987, the Voyageur dollar takes its name from the fur trapper and aboriginal paddling a canoe on the reverse. The obverse has been graced by 3 different monarchs (Kings George V, George VI and Queen Elizabeth II). It has seen several changes in composition (silver until 1968 and then nickel) and two different portraits of Queen Elizabeth. I am not sure how the average Canadian feels about the Voyageur dollar, but I would think there would be a certain sense of nostalgia. To me, getting a Voyageur would be similar to finding a big Eisenhower dollar (minted in the 1971-1978 until it was replaced with the smaller but unpopular Susan B. Anthony dollar).   I did not find any silvers, but I did find several Voyageurs that I needed for my collection, as well as a couple Voyageurs that had special designs commemorating different events. The picture below shows an example of the regular obverse and reverse of a Voyageur dollars on the top row and then the reverses for Manitoba’s centennial (1970), British Columbia’s centennial (1971) and Winnipeg’s centennial (1974).
Voyageur 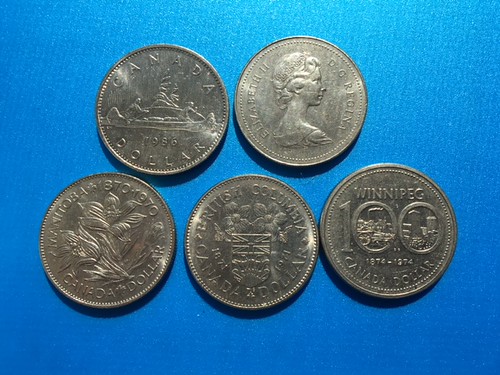 I wasn’t quite as lucky with the Loonies. Out of a roll of 25, there were only a couple interesting ones that were not badly scratched up or corroded from fingerprints. The 1995 Loonie shows a memorial in Ottawa called Reconciliation: The Peacekeeping Monument. The other Loonie (1994) commemorates the National War Memorial, also found in Ottawa. 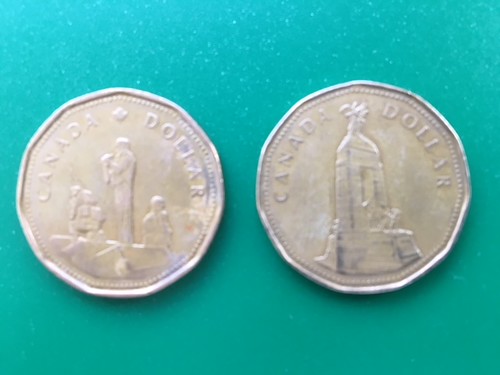 One of my favorite Canadian coins is the Twoonie.  I am intrigued with bi-metallic coins, probably because it is unlike anything we have in the US.  Usually, the shiny nickel outer ring has a separate image than the bronze center (as in the coin on the right in the picuture).   The 2016 coins commemorating the 100th anniversary of the Battle of Vimy (WWI) and the 75th anniversary of the Battle in the Atlantic (WWII) are amazing because  the center and outer rings are both used to make one complete image.   I took a 20th Century  Brit Lit class where we read some of the WWII poet-soldiers, including the famous poem by Lieutenant Colonel John McCrae, so  I am on the lookout for the 2015  Twoonie commemorating the 100th anniversary of the writing of “In Flanders Fields”. 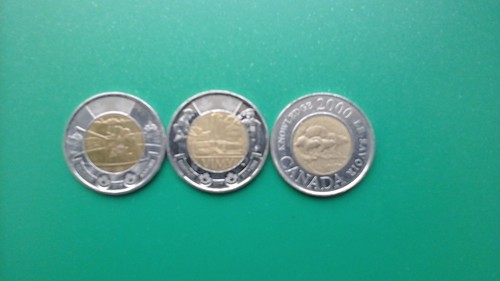