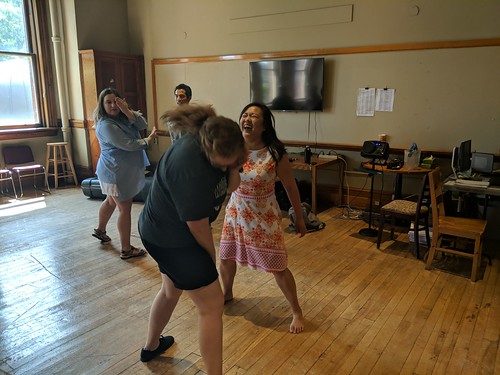 Don’t worry, I’m not actually hurt in this photo. Nor did we really hit each other. It’s all this little thing called stage fighting.

One of the many aspects I love about this trip is that we are able to go behind the scenes and learn all about what it takes to put on a show. Our behind the scenes events include tours, talking to actors, and workshops. During the workshops, actors teach us how to make the magic we see on stage. Friday night, during A Long Day’s Journey Into Night, there were a few scenes where someone was slapped or hit. I had wondered how they made it look and sound so real, but I didn’t have to ponder about it for too long! On Sunday morning, we headed over to the Stratford Normal School to learn all about the art of stage combat. 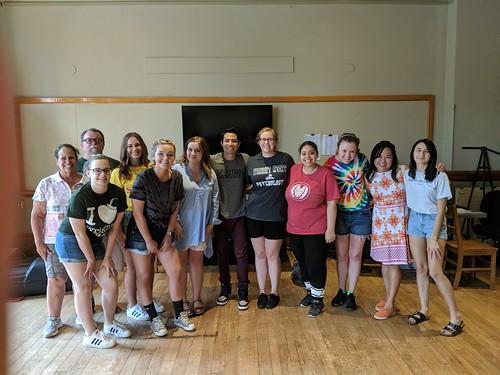 We had the fortune of having Jason Sermonia (pictured in the green shirt in the center) teach us all about combat. Jason is portraying Clarence Clayton Hix in The Music Man and a phantom in The Rocky Horror Show this year and has previously performed at the Tony Awards. During this hour long workshop, Jason did a warm up, taught us how to stage a slap and punch, and then answered any questions we had. 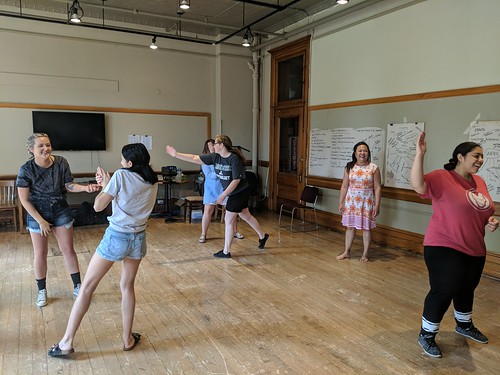 Learning how to stage fight was incredibly interesting for me, as I have a black belt in tae kwon do and have trained in combat since I was a freshman in high school. You make a fist and distribute your weight in a similar manner to actual fighting, but your motions must be made larger in order to be seen by an audience. To practice punching and slapping, we were partnered up and given a chance to learn the movements step by step. I was partnered with Dr. Mejia-LaPerle (hence the title of this post), but I also worked with Amber while Jason was going around the room to make corrections. We practiced sliding our hands across a plane as to not hit our partner, creating the sound (called a knap), and having a reaction. As you can see by the photos, we were all having a lot of fun with it. 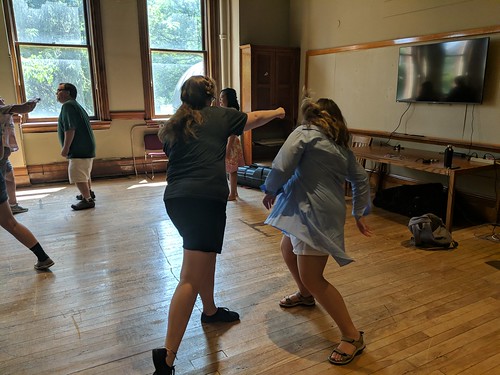 Towards the end of the workshop, Amber and I demonstrated how we had learned to slap each other, while Brian and Diana showed off their punches. This workshop was an amazing experience, as I got to practice acting again (to the point where some people were worried I was legitimately hurt) and learn something I had not done before. Plus, how often do you get to ask your professor “do you want to punch me or should I punch you?”