Productions at the Stratford Theatre Festival are held at four unique theatres. Avon Theatre is a rejuvenated vaudeville theatre with a classic proscenium stage. It boasts a classical neo-classical architecture and its downtown location gives it a perfect traditional “night at the theatre” feel. Tom Patterson Theatre is a small venue picturesquely seated on the banks of the Avon river. Its 360-degree stage provides and exciting and rare experience for the audience as well as an intriguing challenge for the performers and crew. Studio Theatre, located behind Avon on George Street, is known for housing newer and more experimental material for the festival. The furthest seats from the action in this venue are still close to spitting distance. All of these different locations provide unique advantages and disadvantages for both members of the production and the audience. The most impressive of Stratford’s venue for me, however, was certainly the Festival Theatre. As a thrust stage, the audience gets a more dynamic perspective while not restricting the production with especially difficult sight blocking. It was the first venue to house a show for the Stratford Shakespeare Festival way back in a time where it was actually not a building but one of the largest tents in North America. We had the pleasure of receiving an exhaustive tour of the theatre’s inner workings (unfortunately pictures were not allowed). The history of the place is clear right away just by walking into the lobby. Busts of former festival directors and priceless artwork depicting many who worked with the festival are scattered about. If you are feeling adventurous during intermission you can find years and years of history before you make it back to your seat for the second act. Just outside the theatre is a beautifully tended garden. A captivating sculpture of William himself overlooks (sculpted by members of the festival’s properties department) an impressive assortment of labeled herbs and flowers. Only at the Festival Theatre does fanfare from the balconies promote the beginning of every performance and the end of each intermission. These traditional touches compliment the classic plays the stage is normally graced with. Every theatre is a wealth of personality, and the heart and history of the Stratford Theatre Festival is apparent at Festival Theatre. 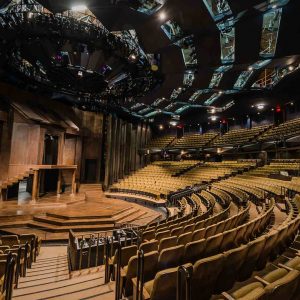