Walking through the streets of Stratford, I could not help but notice how beautiful the neighborhoods are. The homes were built in another era and the trend is for beautiful gardens instead of manicured lawns. The Architectural Conservancy of Ontario offers a self-guided tour of one of the first residential neighborhoods, the Cobourg Street Stroll. Their website features a downloadable brochure that you can use to learn about the history of the picturesque neighborhoods. I really did not need an excuse to take a walk through the neighborhood, but it was nice to be able to learn about a historic neighborhood. If you’d like to follow the tour, please click on the following link: http://www.stratford-perthcountybranchaco.ca/Cobourg_St._Stroll_Tour_Guide/ 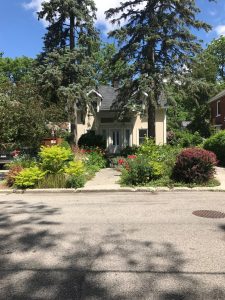 The first house I came to that I was enchanted by was a house with a beautiful garden. This is one of the newer houses in the neighborhood, as it was built in 1938. One of the original owners, Dorothy Fiebig, was known to be a fantastic gardener and the house still maintains a beautiful garden. While the house is one of the newer houses on the tour, it indicates the development of Stratford as a community where generations would remain. 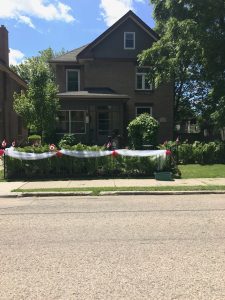 While this is a residential neighborhood, some of the homes have been converted into bed and breakfasts. This house was built in 1907 by a jeweler and is one of the homes that has been converted into a bed and breakfast. The gardens in front are certainly inviting and the decorations are festive for the recent celebration of the 150th anniversary of Canada’s independence. 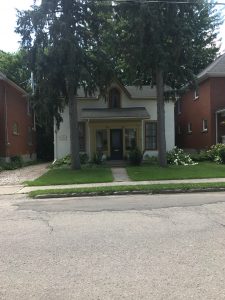 Built in 1868, this house is one of the older houses on the tour having been built only one year after Canada gained its independence. The house as we see it is not the original look of the house. It was originally a clapboard exterior but has been updated to a pebble dash exterior. It is one of the smaller, plainer houses on the street, but that is befitting of the change in architectural styles throughout the time period these houses were built. This was definitely a stroll worth taking as knowing background information on the houses and the original owners gives a perspective on what the neighborhood might have been like 100 years ago.