Stratford made an investment into it’s future when the city gave Tom Patterson $125 in 1953, and the subsequent Festival Theatre not only has returned their monetary investment millions of times over, but invests their culture into the town. 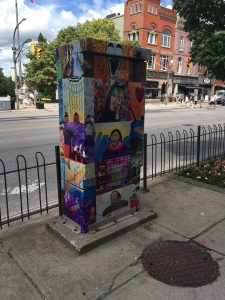 There is a strive for community inclusiveness: discounted tickets for students under the age of thirty, relaxed shows for special needs audiences, and highly interactive children’s shows, such as this year’s Treasure Island.

After nine shows in nine days, it’s clear that the Festival’s primary audience members are retirees, or visitors on vacation, or both. Nonetheless, the Festival Theatre strives to attract more younger audience members with it’s “Play-On” tickets for students between the ages of 16 and 29. 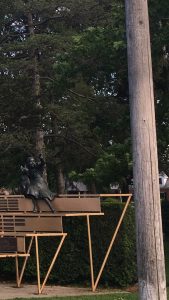 These highly discounted tickets, which can rate as low as $20, are an effort on the Festival’s behalf to invest culture into future generations. Unfortunately it seems that few millennials are partaking in the deals, which I find mind boggling. I don’t understand why local twenty-somethings aren’t interested, if only to have something new to do. I spoke to one waitress who was unaware that such tickets are available. Either the Festival needs to find better advertising for their “Play-On” tickets, or local millennials need to start paying better attention to their surroundings.

Another form of community cultural outreach are the Festival’s “relaxed” shows. According to our liaison with the Festival Theatre “relaxed” shows are performed for special needs audiences. At the beginning of these shows the cast come out to the audience and speak with them all about what is going to happen on stage, and the shows effects – sound, lighting, and visual – are lessened or softened in respect to the audience’s sensory needs. These shows are relatively new, but they are quite the hit for all involved.

The Festival Theatre’s efforts to invest culture back into Stratford continues with it’s annual children’s show. For the last several years the children’s show has been performed in the Avon Theatre. Our liaison couldn’t say as to why exactly the Avon was chosen, but they did agree that the Avon’s location is the most family accessible, as there is plenty of restaurants nearby, and there are ramps to the seats instead of stairs. Moreover, these shows are highly interactive and inclusive for the children in the audience. 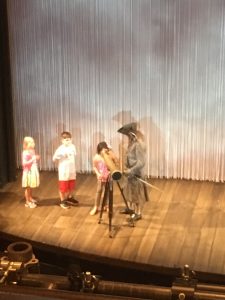 For example, before the beginning of Treasure Island, the children were welcomed to the stage to look through a pirate’s telescope. Also, throughout the performance several characters, especially Jim Hawkins and Long John Silver, turned to the audience for help in a manner that drew in children of all ages. At the end of the performance, Jim held Long John to his promise of sharing his gold for their assistance, and all of them left with a chocolate gold coin. In addition to the performance’s inclusiveness, there is a fun treasure hunt for kids to do out in the town. 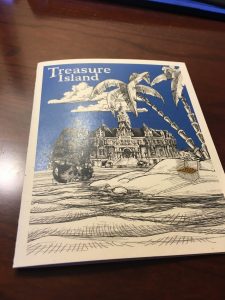 Fourteen of Stratford’s local stores: JENN & Larry’s, Family & Company, Ten Thousands Villages, Fundamentals Books & Toys, The Milkey Whey, Sinclair Pharmacy, Blowes Travel, Ensurco Insurance, Soup Surreal, Tiffany’s Tattoos, revel, Bard’s Steakhouse, Stratford Festival Shop, and Covet Community Closet, are participating in a weekly raffle drawing for Stratford Gift Certificates, kids just go to each store and find the item based on the store’s clue. With their discounted tickets, relaxed showings, and the activities surrounding the annual children’s show, the Festival Theatre is trying to share it’s wealth. Therefore, it is clear that the Festival Theatre understands the need to invest culture back into the community that took a gamble by investing it itself.