Ohio music is important to me. I once played in a small post-punk band within a small scene in Athens, Ohio–an experience to which I owe a lot of personal development of character and taste–and writing, playing, and recording with my best friends in our basements, lodges, and crap two-bedroom apartments felt like I was part of a real artistic community. I miss those days a lot. Playing in a band scene inevitably exposes you to other bands from that same area, bands that may have allowed for the scene in which you play to exist. Traveling to Stratford, Ontario, I wanted to encounter those parallels of artistic influence and community impact that I know from my home state, so I sought out a local record store called Diamond Dogs Vinyl in downtown Stratford.

Walking in, I met the owner, Wayne, and when I introduced myself as an Ohioan, he told me that his store had just been shoplifted by an Ohioan but two weeks ago. I at first wasn’t able to find anything that I was really looking for, but decided to stick around to maybe set a better impression for my home state. Not that I don’t think Ohioans are capable of shoplifting from locally owned stores, I absolutely do, but I wanted to maybe brighten his day a bit and maybe dissolve any harbored conceptions about Ohio if he was holding them.

So I asked him what Ontario bands he listened to. He told me about Feist, Rush, and some other typical groups I’d already heard of, not what I came in to hear. He eventually led me to his 45’s section, and that’s where gold was struck. Here was the raw fidelity, the impassioned growls of sweaty longhaired vocalists, the chugging guitars and off-kilter drumming. My sonic home away from home. Wayne gave me a discount saying that I seemed like an okay guy for an Ohioan. 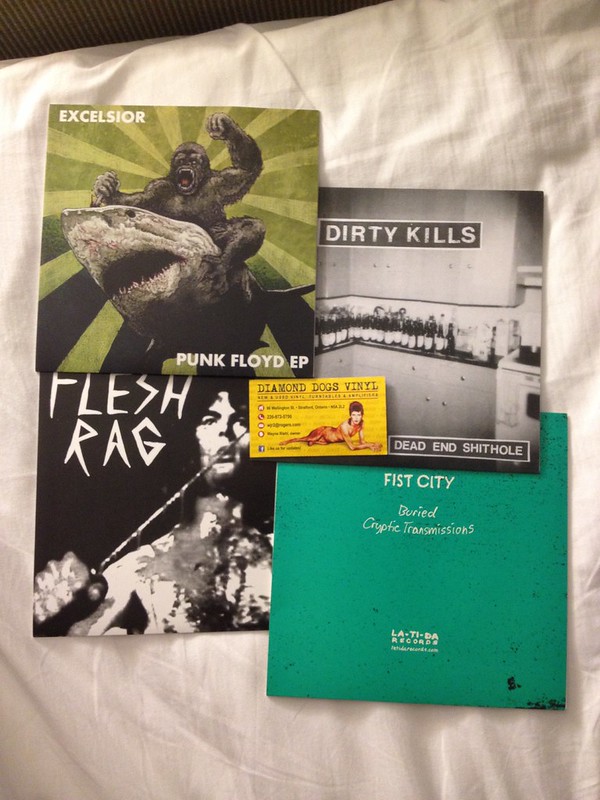 I walked away with a surf-rock garage group known as Fist City, Flesh Rag, a deliciously straightforward hardcore group, some pop-punkers called Dirty Kills, and maybe my favorite find, Excelsior, who capture that garagey dad-rock that strays into hardcore–an aesthetic that I love in local groups that I’m familiar with from my home state. That and two more rarities all for just twenty Canadian dollars. Diamond Dogs was a worthy trip.