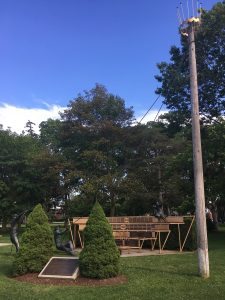 origin story of the Stratford Festival is miraculous: on the precipice of financial ruin, Stratford Ontario survived the hazards of mercurial mid-twentieth century politics and technology through theatre. This astounds me after growing up in the cultural mindset of culture being to expensive during times of financial crisis, with the liberal arts budgets being cut by schools and universities, with the United States Government cutting funding to educational and cultural. What was meant to be a temporary festival to bring in summer tourist has evolved into one the most influential, highly regarded, and infamous theatre companies in the world. Queen Elizabeth II herself has been in attendance twice. Some of the greatest actors of the twentieth and twenty-first centuries have worked for the Festival Theatre, such as:
Alan Bates, Brian Bedford, Zoe Caldwell, Douglas Campbell, Hume Cronyn, Alec Guiness, Lorne Greene, Julie Harris, Martha Henry, William Hutt, James Mason, Siobhan McKenna, John Neville, Christopher Plummer, Douglas Rain, Kate Reid, Jason Robards Jr., Paul Scofield, Maggie Smith, Jessica Tandy, Peter Ustinov, and Al Wax man. (229)
The thrust stage of the Festival Theatre alone is enough to draw in actors, designers, directors, and theatre lovers. 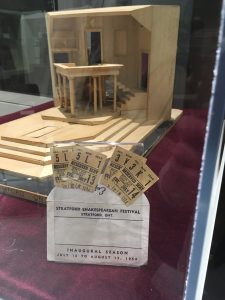 It is truly a sight to behold, and knowing that it’s the first of its kind in millennia is thrilling. There is magic that emanates from that stage into the whole idyllic town, a remnant of the miracle of the first festival in 1952-53 which brought tens of thousands to experience Shakespeare. However, the magic is simply the will behind the festival itself, the will of “Tony Guthrie, Tanya Moiseiwitsch, Cecil Clark, and his wife Jacqueline Cundall, Ray Diffen and Annette Geber and other giants of modern theatre…”(Patterson 7), but also the will of Stratford citizens and Tom Patterson – the spark that lit the bang – whose “crazy idea” (225) of a theatre carved out in the hillside exploded into a sun of culture whose gravitational pull brings theatre fans of all ages across the globe for an unforgettable and unique experience. 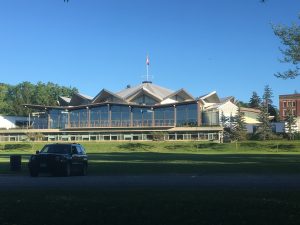