In the Archives of the Stratford Theatre, unexpected treasures can be found. Expected treasures, too, of course, but treasures unlooked for are often the most delightful. The warehouse of the Archives contains a veritable library of costumes, props, set designs, scripts, recordings of performances, and a surprising number of horses.

Here’s one of them, a carousel horse from the 2015 Stratford production of Carousel. 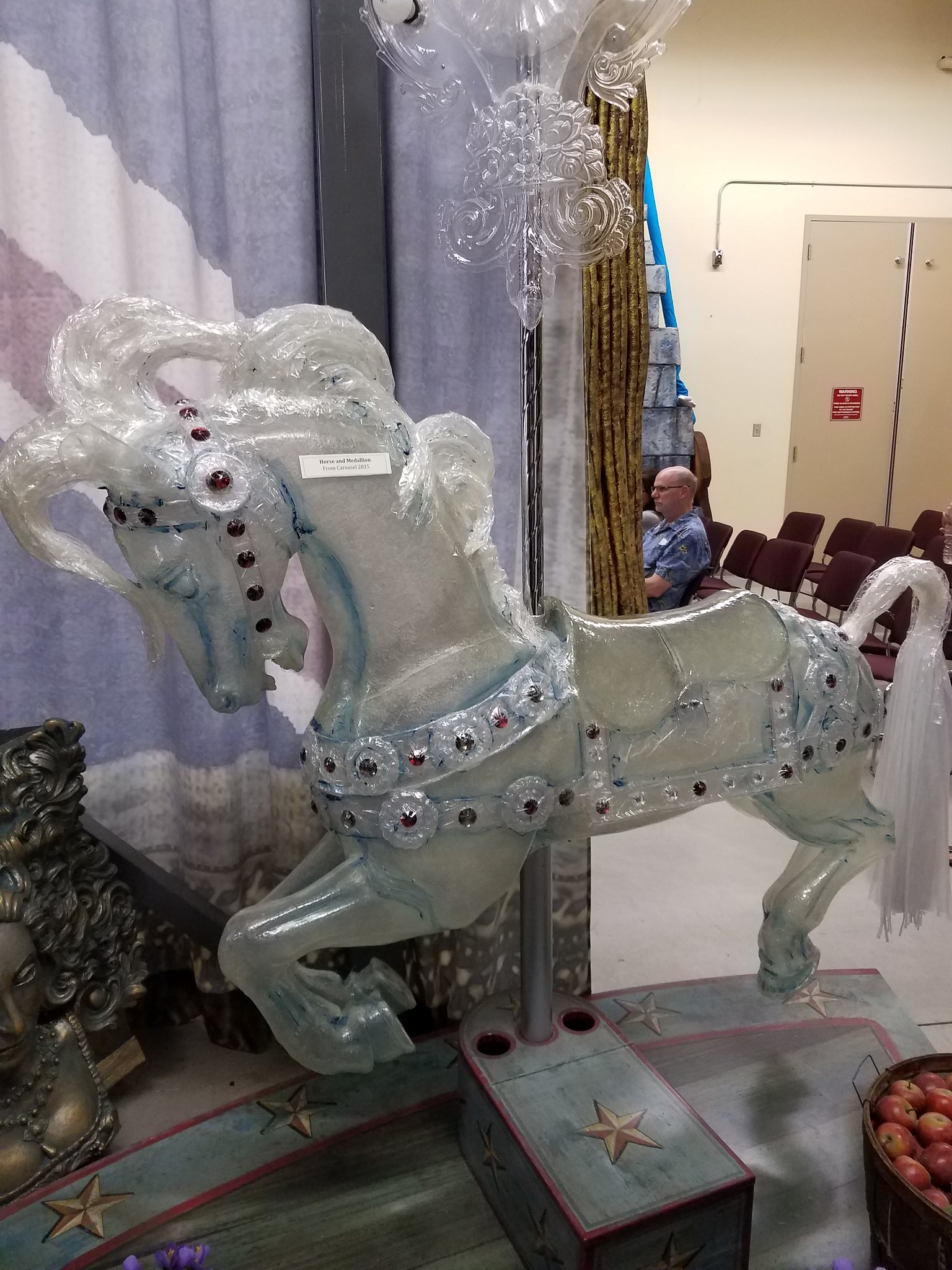 She’s lovely, as if crystal were caught in a canter, but made out of mere plastic. Many of the props in Stratford shows are made out of material you could find at a dollar store. The props department has the incredible task of creating glorious props out of humble origins.

More horses! These two stand in the Desmond Healey exhibit, bedecked in horse blankets that cover their metal frames. They were jousting horses for Richard III in 1979, later returning to the stage in 2011 for Camelot. 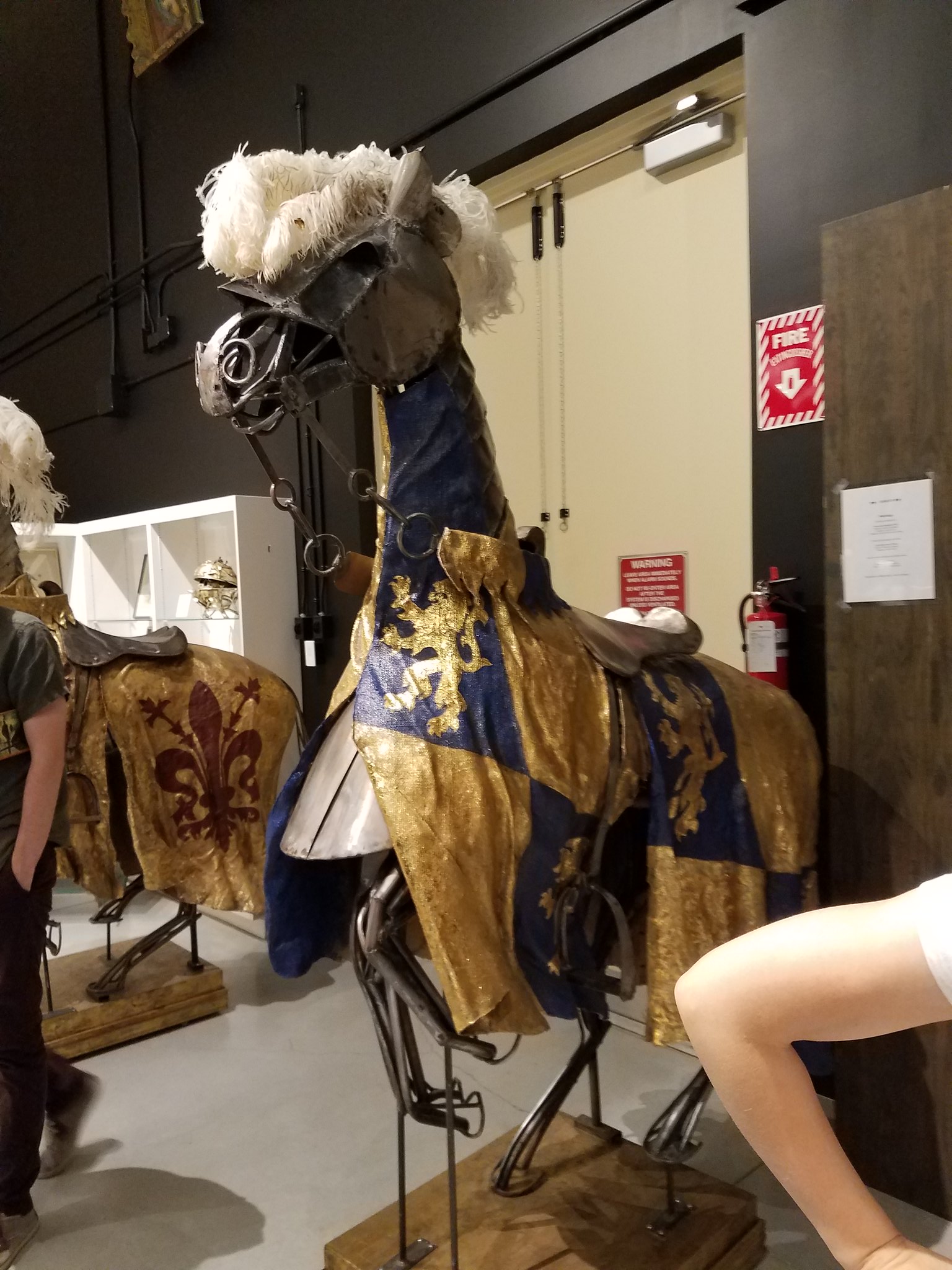 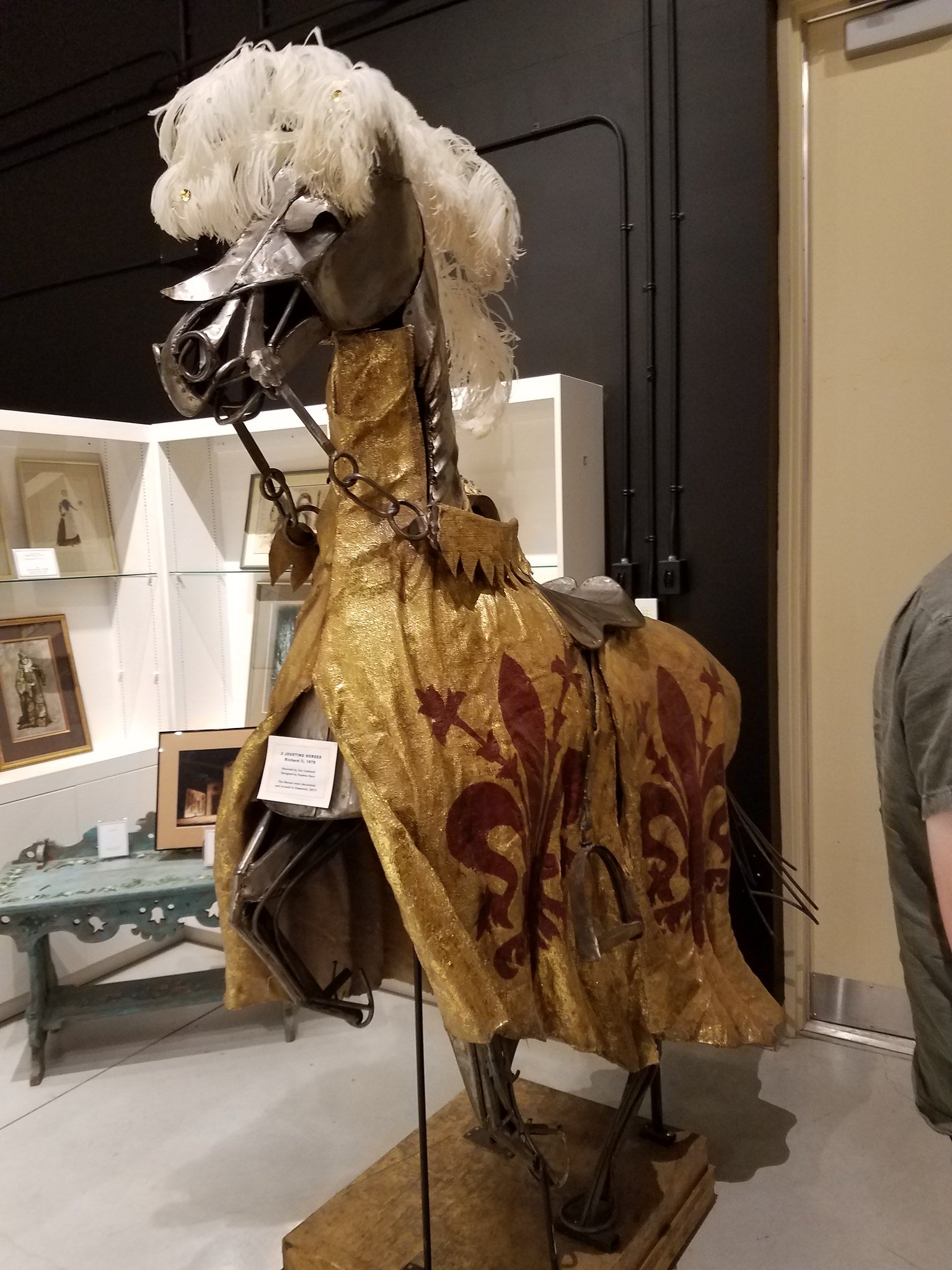 The Archive director is a Scotswoman named Liza Giffen. She is tall and funny and intelligent and I want to be her when I grow up. She told us in our tour that the huge horse head and torso in the downstairs exhibit is only on the first floor because it’s too big to fit up the stairs. 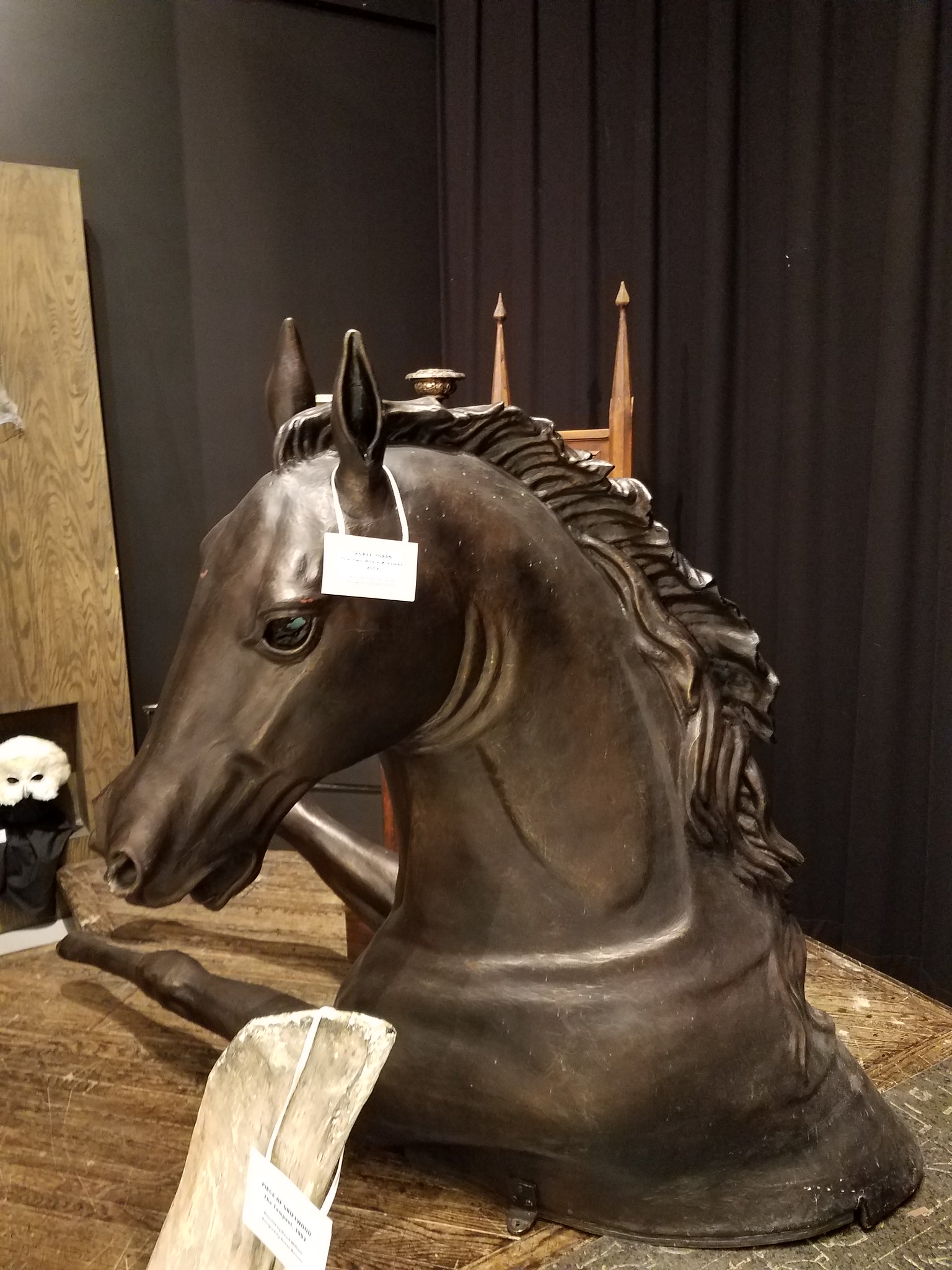 Isn’t he magnificent? He’s from a 2002 production of The Two Noble Kinsman. His fierce mien allows him to stand out in the crowd, head and shoulders above the rest.

Dr. LaPerle was kind enough to model this horse’s head for me as we waited for our tour of the Costume Warehouse. 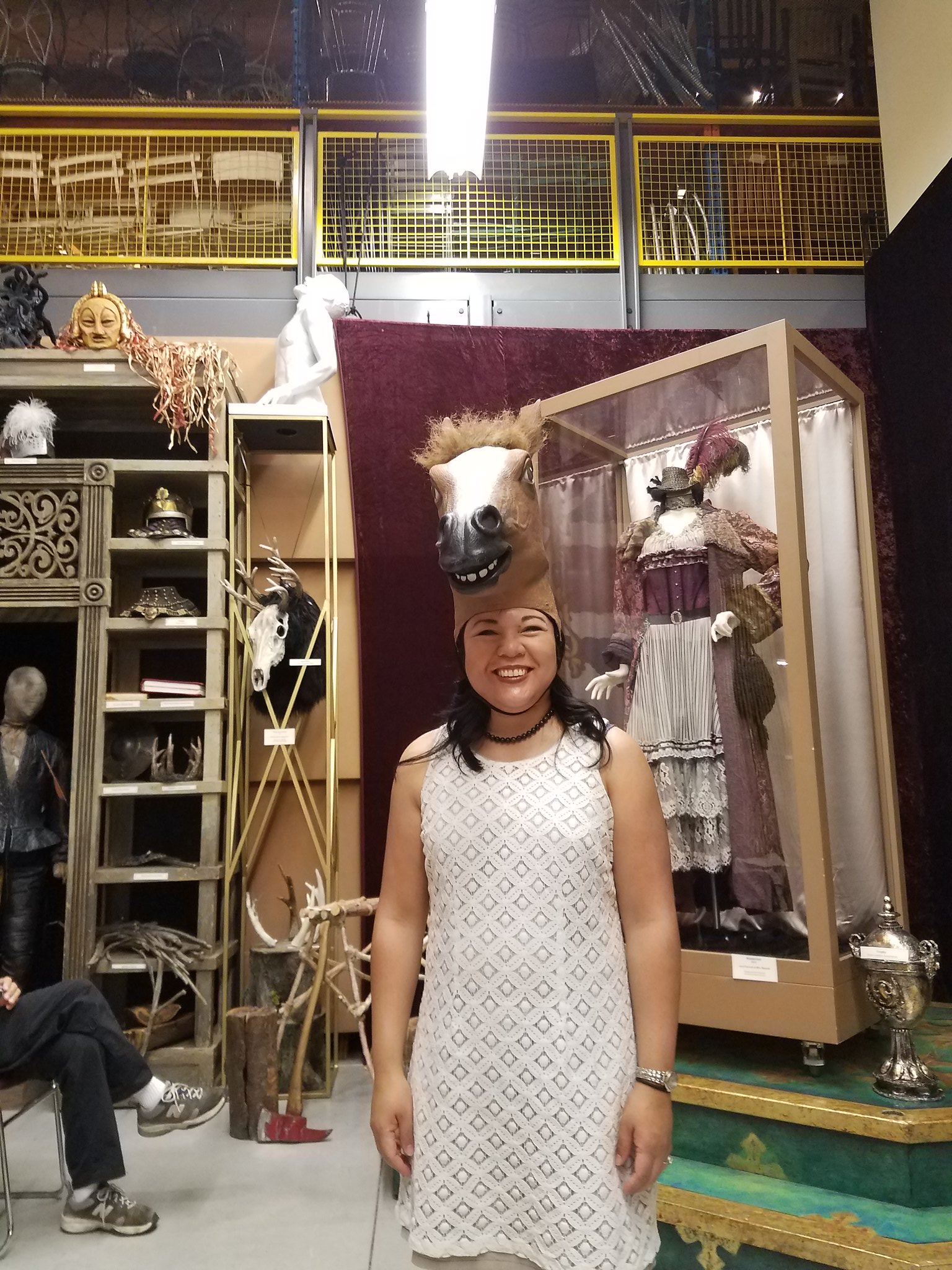 That horse head shares a space with a horse made of straw, though calling it a strawhorse may be a bit harsh. It’s a costume, meant to be worn by an actor, but now it rests high on a shelf above an alligator, surveying this small, close introductory room with a kindly air of age and warmth. 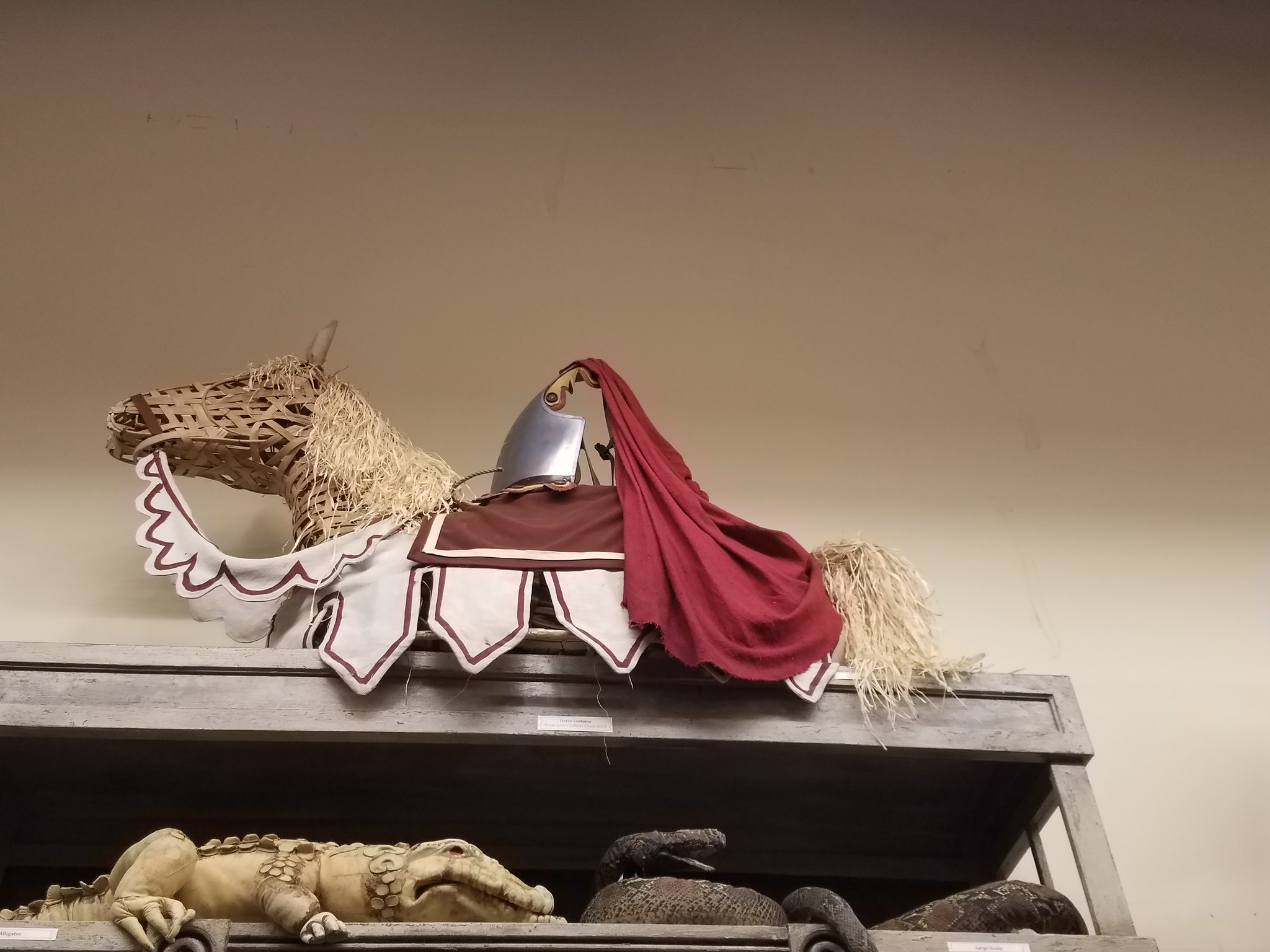 The straw horse’s opposite can be found amongst the racks of costumes: 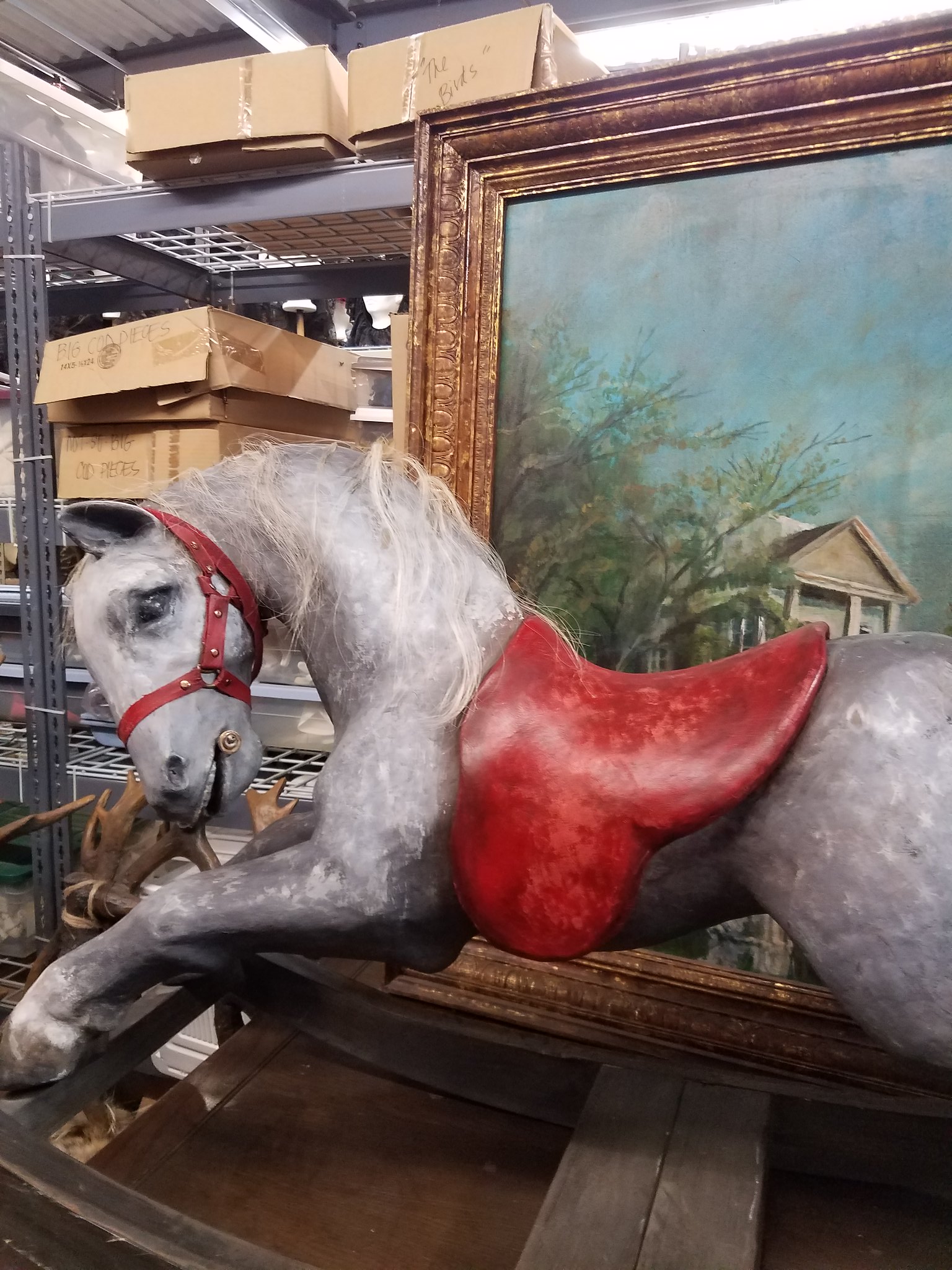 This dead-eyed rocking horse, unlabeled and uncannily, rests (as much as it possibly can be restful) in a row of lightly-used furniture. Our tour guide didn’t know where it came from. We could not find a tag. It might have been in Peter Pan. Perhaps Liza knows, but I didn’t think to ask until it was too late.

Liza worked in the UK until three years ago, when she moved to Stratford to accept the position of Archive Director at the Stratford Theater Company. In the UK, she worked in business and publishing house archives, dabbling in every possible genre of her craft. She talked about the Archive like some people talk about church. Like it’s a sacred place. A library of memory. She’s from a town in Scotland between Glasgow and Edinburgh, called Falkirk. She says it’s a terrible place, and I suppose she would know. The horses in the archives probably don’t faze her. 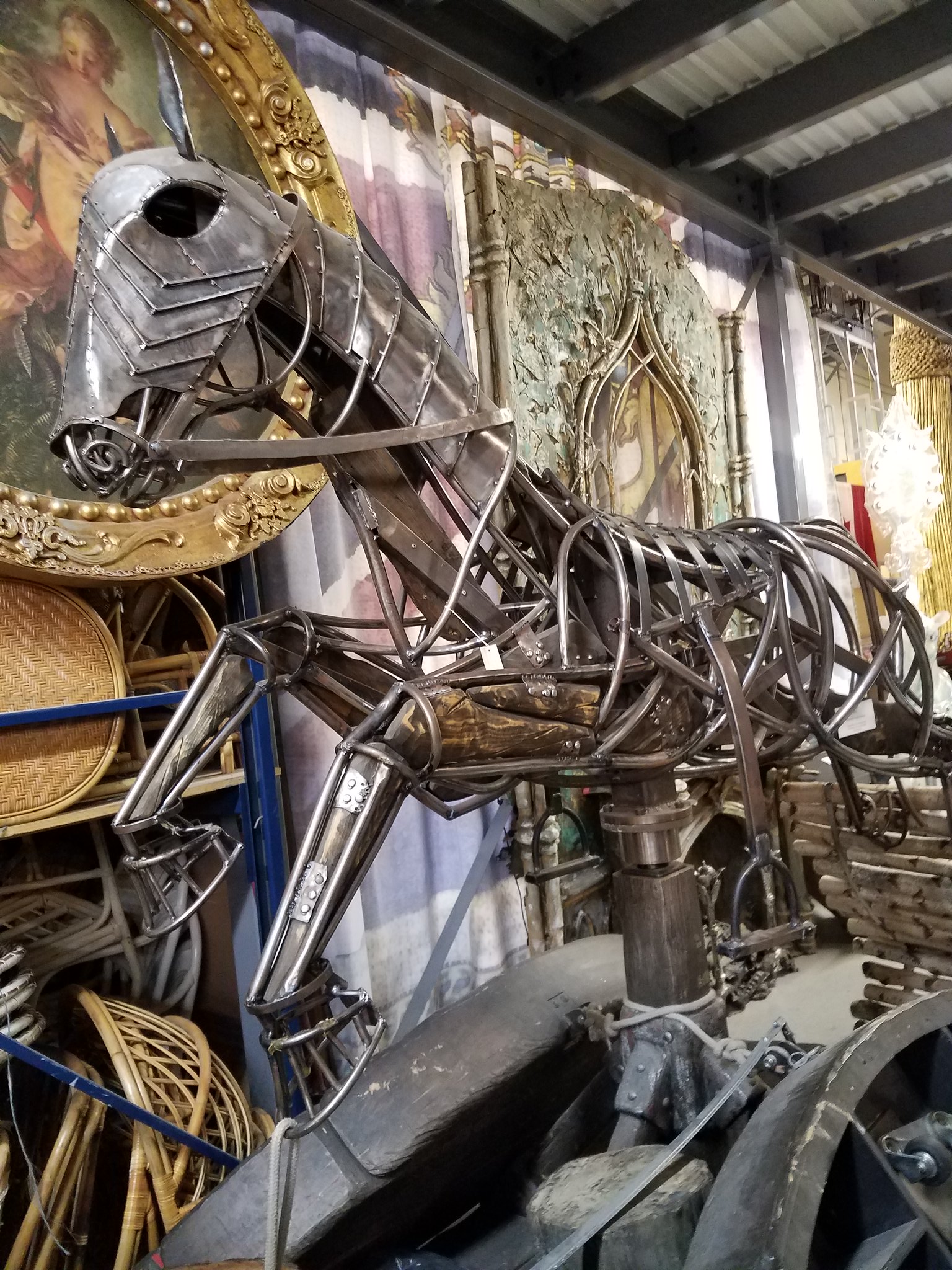 This one is from a 1997 Camelot production. It is very similar to the Richard III horses. It has a mechanism called a hydraulic break attached to its post. This suctions to the floor and holds the horse in place on stage so it won’t slide all over while it’s supposed to be standing at attention. 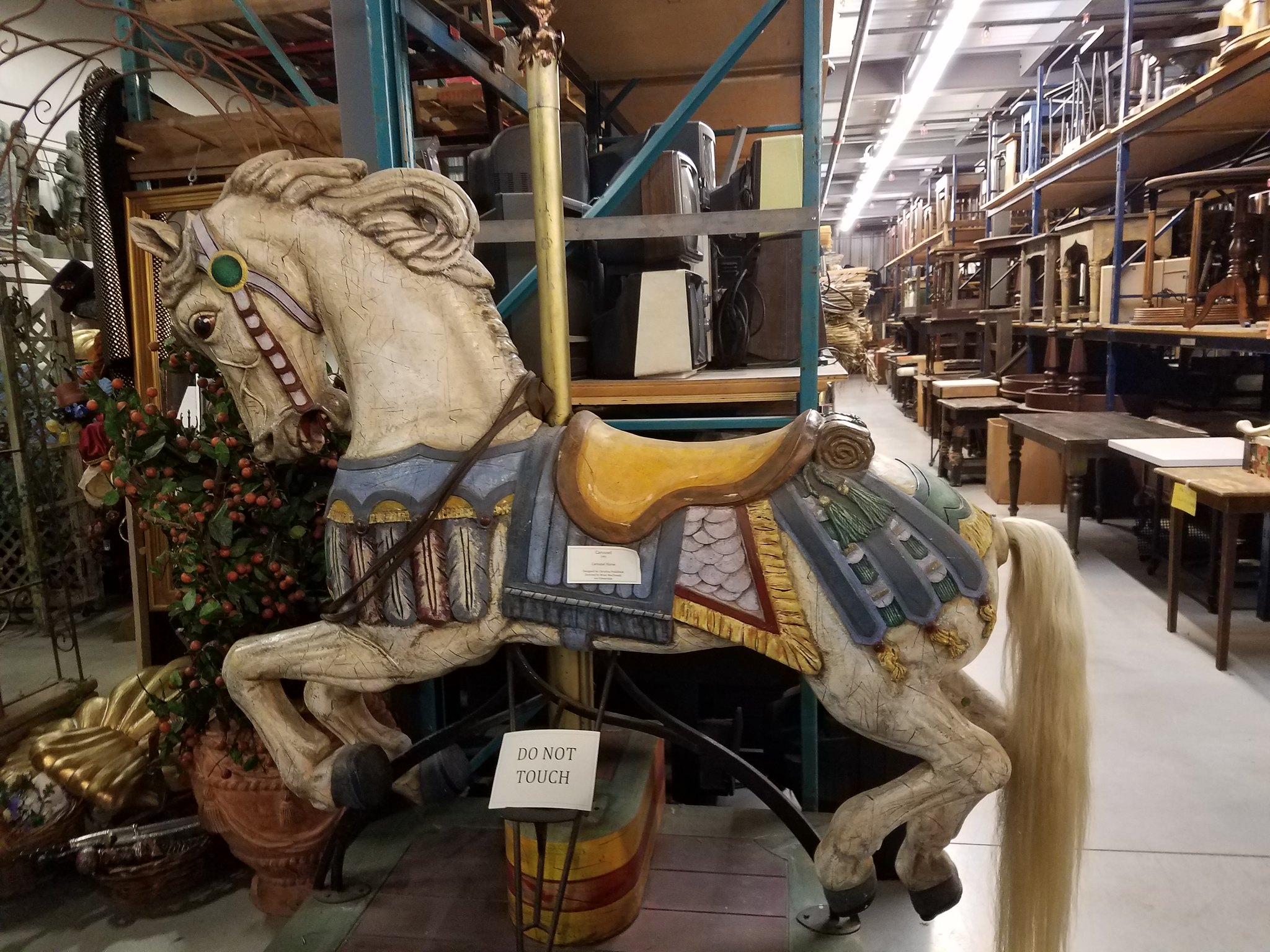 And this horse is another Carousel retiree, though it came from a 1997 production. The differences between the two almost mirror the differences in style and costume that the actors and production designers go through with every new imagining of a play. A show can change drastically over time, and the Archives have a record of that, too. It’s like a snake, shedding its skin, according to Liza, and the Archivist must come along behind and pick up that skin, and preserve it, and keep it in a little library next to all the other snake skins. This metaphor was less creepy when Liza was using it. 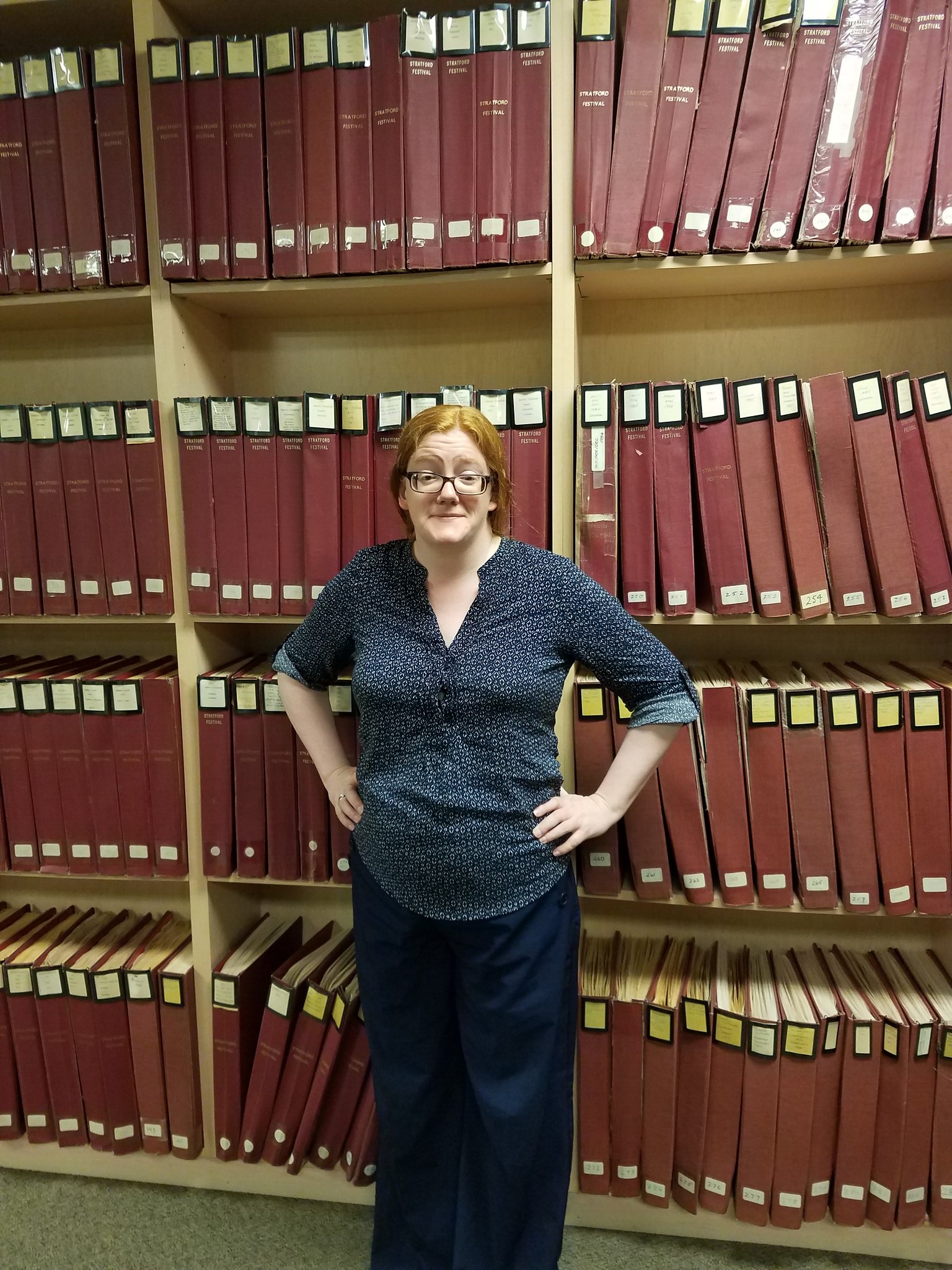 I think we all took away something from the Archives. Some came for paper, for memories of ink and parchment. Some came for costumes, for cloth on their skin and lace itching their throats. I came with no expectations other than to find something incredible, and I found eight horses hiding in the haystack, and the woman who keeps them all company.