We saw The Bakkhai on Saturday. It was An Experience.

I’ve read the play, studied various interpretations, and argued with classmates about who these characters are. The part  of me that took two courses and decided that I needed to minor in Classical Studies cackled with glee at the opportunity to see Euripides’ tragedy, translated by Anne Carson and newly imagined and produced on the Stratford stage. I was invested, you might say. 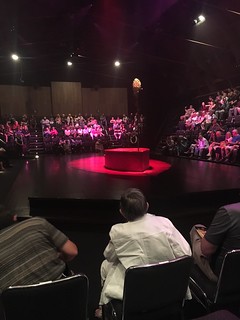 Throughout the entire play, I felt like I didn’t blink even once. The intensity of this show cannot fully be described with words, but it was a bit like what standing on your porch during a thunderstorm feels like. The hair on your body stands up. Your eyes don’t know where to look. Within seconds, your heart is pounding and you’re leaning forward to get closer, without even meaning to.

After the show, we had the chance to talk to a couple of the actors: Mac Fyfe, who played the disgruntled and vengeful god, Dionysos, and André Morin, who played the unhappy survivor and servant of Pentheus.

It wasn’t quite as intense as the show, but it was close.

Mac Fyfe has eyes that could stare into your soul. It would have been intimidating except that he was so genuinely nice that I forgot to be nervous. He plays Dionysos so comfortably that even the arguably awkward and overtly sexual scenes seem natural and easy. André Morin plays what is essentially a stock character in Greek theater with a depth that goes beyond the text. He was charming and cheerful and incredibly well-spoken.

It was a pretty lively talk-back. We asked about character choices, about staging, about the text the production uses. I think they were almost as excited as we were. At one point, Mac came out of his chair, and André was nearly bouncing in his. It was funny and fun and we learned a lot about character development and the process of the production, as well as the actors’ research into the play and the characters.

Mac Fyfe said that playing Dionysos’ gender-fluidity is “really fun.” He was clearly invested in and thrilled about his character. Dionysos is pretty vicious in this play, and Mac was reveling in it. André Morin gets to deliver some of the most dramatic lines in the play, the news of Agave murdering his master, Pentheus. On stage he is first serious and then grieving after the murder. Off stage, he was all smiles. They were both charming and kind, answering our questions thoroughly and with enthusiasm, even though they must have been exhausted and we kept adding, “just one more thing!”

Our talk-backs are a great privilege and opportunity, so we were determined to pull as much out of our time as possible, and Mac Fyfe and André Morin rose to the challenge. We didn’t have a thunderstorm indoors, but it was a good time anyway.