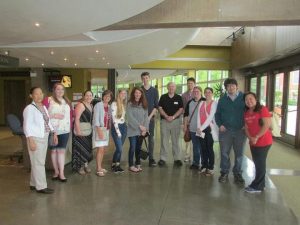 Roger Hilderly, a tour guide for The Festival Theatre, came to Stratford in 1965 to attend The Stratford Teacher’s College, fell in love with the city, and he never left.  He has lived in Stratford, Ontario for 52 years. Roger has a great love for the city, for the theatre, and for the Stratford Festival. He is a retired schoolteacher who earned his teaching degree at The Stratford Teacher’s College which is ironically adjacent to The Festival Theatre which is now used for workshops and theatre classes. He has served as a volunteer tour guide with the Friends of the Festival and has given tours of The Festival Theatre, the Costume Warehouse, the Archives, and the Shakespearean Gardens for the past 22 years. I immediately formed a kinship with him because of his love for theatre, his intimate knowledge of the history of the Stratford theatre scene, and because of his affable, easygoing manner.

Roger opened our tour by giving us this quote: “An actor’s vocation is finding work; an actor’s vacation is working.” He explained that Tom Patterson, the founder of the Stratford Shakespeare Festival, formed his grand idea for reviving Stratford’s economy as a teenager when he wrote the city and asked for $100 to provide the seed money to begin the festival. Roger shared that many city officials thought Patterson’s idea to host the festival in Stratford would never work because of the remote location, but the city responded by giving him $125 to help him get started. Roger also explained that Patterson was put in touch with Tyrone Guthrie, a renowed British actor and director, and in turn, they were connected with a brilliant British stage designer named Tanya Moiseiwitsch who designed the thrust stage to resemble both a classic Greek amphitheatre and Shakespeare’s Globe Theatre to create the stage in The Festival Theatre. This design has become a model for other stages in North America and Great Britain. In Roger’ own words, with the combined trio of Patterson, Guthrie, and Moiseiwitsch, “the rest was history!”

Because of his longtime affiliation with the theatre and its beginnings, Roger has had many interesting conversations with Tom Patterson, Florence Patterson (Tom’s sister-in-law), Jack Merigold (the first stage manager), and Paddy Crean, who trained Stratford actors in stage combat and wrote a book which is used worldwide to train actors in stage combat. Roger’s intimate knowledge of the history and innerworkings of The Stratford Festival in general, and of the Festival Theatre itself, became quite clear as he highlighted Mr. Guthrie’s philosophy of equality and respect with regard to every aspect of the Stratford Festival. His driving motto was “Everyone’s equal!” There were no star’s dressing rooms, and Mr. Guthrie himself could often be spotted sweeping the stage, or working with the sound and light crews to prepare for a rehearsal. Roger also explained that this equality still exists today as actors, wig makers, costume designers, ushers, combat coaches, sound and light crews, and many others work together and exist harmoniously to make each show the best it can be.

Roger tells us that the first lines spoken at The Stratford Shakespeare Festival in 1952 were intoned by Alec Guinness from Richard III: “Now is the winter of our discontent/Made glorious summer by this son of York.”   This year marks the Stratford Shakespeare Festival’s 65th season with 14 shows running from April through October. He informed us that this year’s total budget for the season is $61 million dollars.

Currently, 500,000 tourists visit Stratford every year and roughly 300,000 people return after their first visit. He told us of an elderly couple who visited when in 1952 when the festival was housed in a tent who have visited and attended performances every year since.  In the telling of these final details, Roger’s fondness and pride for the Stratford Festival, the Festival Theatre, and the art of theatre itself is illuminated in the pride and enthusiasm he illustrates in the amazing tour he gives.