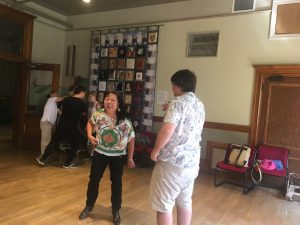 On our third day in Stratford, Dr. Carol Mejia-La Perle arranged for us to participate in a combat workshop with two actors trained to engage in safe  yet believable combat on stage. Our hosts for this workshop were Johnathan Sousa, who appears in Twelfth Night, and plays the roles of Careless in The School for Scandal, and Valere in Tartuffe this season, and Emilio Vieira, who appears in The School for Scandal, as Curio in Twelfth Night, and as Damis in Tartuffe. Right away we learned that stage combat was very physically draining, and if not properly handled, actors can either hurt themselves or others while engaged in fighting.

Although this workshop was great fun, we also learned that safety comes first. We were instructed to pair up with a classmate, to stand 6-8 inches apart, to use our legs, and to pretend there was an imaginary pane of glass between us. Emilio explained that this allows the actors to be safe during combat while maintaining the illusion of actual combat from the audience’s perspective. He asked us to practice wiping this pane of glass on the wall to get the feeling that we were to extend our energy outwards, away from the target. This pane of glass analogy was helpful as we faced our partners and were instructed on how to punch, slap, and pull hair without actually ever harming them.

Timing is everything.  I found that there was a lot to remember as we took turns with our partner being the aggressor and the victim. This gave me a whole new respect for the actors and reminded me of Roger’s discussion of combat training during our tour of The Festival Theatre: “For every second of combat, each actor practices for one hour!” Now, that’s dedication!